The new year – January in particular – was a slow burn for me.  There was a death in our family, we returned from a long holiday in the US, and our kids fell off the time zone and were a sleep wreck for a solid week.  Something funky happened to my neck and I was stiff as a board.  I was officially losing it. I know I’m not alone.  We all have these periods where we just feel off. I needed a cleanse.

Post- cancer, I’ve become a lot more in tune with my body’s cycles.  Before that, I didn’t really notice I had any energetic cycles (beyond my menstrual cycle, of course… I did notice that one).  I was too busy trying to make things happen to care about my own body and emotional state.  Now I realize that I tend to withdraw emotionally at the beginning of each new year. I’m not sure why. I think psychologically I feel the weight that I’ve been lucky enough to have another year ahead, and I shouldn’t waste it… I guess it’s a feeling of gratitude mixed with a subconscious fear of screwing it up.  That sits a little heavy. 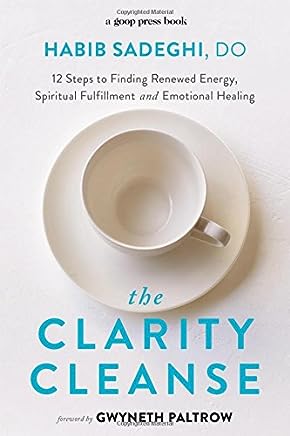 Last year (Feb ’18), I countered this by kicking off the year with the Clarity Cleanse, which I learned about from goop.  Although I was a cleansing virgin, it was a big hit.  I picked this cleanse because I wanted to cleanse my emotions – I work on being healthy everyday, and I’m not interested in a diet to lose weight.  Health is so much bigger than our bodies.  Anyway, I did the cleansed with my friend Lori in the US – we read the book together and called each other daily to report on sardine consumption, constipation, and headaches. We kept each other on task for our 12 minutes of writing each day.  I lasted 4 days (and cheated for a lunch on one of them).  But… by the end of the week, we had made so much progress!  We were practically eating the sardines raw, and writing twice a day.  Through my writing and whatever other voodoo magic happened to me on that cleanse, I came to a breakthrough realization of why I was having recurring UTIs  – and I haven’t had one since. Feel free to play skeptic or call me crazy…I probably would too. But it’s true.

This year, I repeated the Clarity Cleanse but it wasn’t quite the same. My sense is that most of the big mental housekeeping already happened last year. I did follow the sardine, brown rice, and oxidized apple diet for 5 days though, without cheating!  I was euphoric about that.  Plus, doing the cleanse and all of that writing makes you realize how much you are grateful for.  But from a cleanse standpoint, the best is yet to come for me this year I think.

Last Sunday, we had lunch with my friend from preschool who has lived in Paris for 20 years, Edward (now Edouard – he’s French, and grew up in a french-speaking household).  Anyway, he’s one of the most brilliant human beings I’ve ever met, went to Oxford to study divinity, became a preacher, and now lives in the 15th arr with his 4 kids and lovely wife.  I was crankily complaining about my cleanse because I couldn’t drink the delicious wine he was pouring, and he made a super interesting comment. “Have you ever thought about a different kind of cleanse? The point of a fast is to make space in your body and mind to renew … why don’t you give up your phone or social media instead of focusing on food?”  I’m intrigued.  He’s right – the real addiction for me these days is to the (false) tether of my phone. Has anyone tried a social media or phone cleanse?

The bigger question is, what is most important to cleanse from in our current society?

I’m so interested in your ideas, please lmk!  Crappy food?  Environmental/chemical toxins?  Emotional toxins?  Social media?  Constant connectivity?  What else?  Starting from a broad point of insight into where we’re trying to get with a cleanse is probably best.  I am dying to hear what you all out there have done or considered from a cleanse perspective … everything from any sort of nutrition-based cleanse, yoga cleanse, meditation-based cleanse, social media cleanse, or any other option in between is on the table as far as I’m concerned. Or, if you haven’t done a cleanse – what stops you?  I’d love to hear your stories. Let’s do this.

Insider Tips: Things to Do in Paris

Like most sites, we use cookies to ensure that we give you the best experience. If you continue to use this site we will assume you are happy with it and accept our privacy policy. Ok